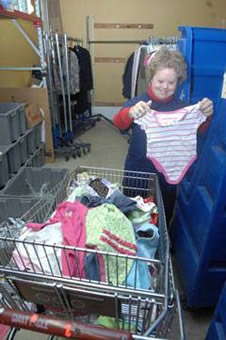 Jessica Shaffer of Jennerstown sorts clothing from a bin in a back room at the Goodwill store in Somerset. (Staff photo by Roger Vogel)

Goodwill officials want people to know that donations dropped off to local Goodwill retail stores go much further than in the hands of another resident.

Goodwill of the Southern Alleghenies, which serves six and a half counties, offers more than what is in its stores.

“Our mission is to empower individuals and families with employment barriers so they can be self-sufficient through work services,” said Phyllis Bandstra, president and chief executive officer of Goodwill. “It’s geared toward helping people move forward. It’s not a hand out, it’s a hand up.”

Bandstra said many people are unaware that the nonprofit group offers programs like:

Bandstra said that 93 cents on every dollar goes back to these types of programs and services, which is why continuous donations are important.

“We are here to draw the most value out of the goods given to us and our donors expect that from us,” she said.

When workers find collectibles or antique items donated to Goodwill they may put them on shopgoodwill.com to try to get the most value out of the item. The site allows people from all over the country to bid on items that may not necessarily sell for what they are worth at local stores. However, the money still goes to the local community where the item was first donated.

For example, an antique lamp is donated to the Somerset retail store. Workers decide they can probably get more money by placing it on shopgoodwill.com. Someone from California buys the lamp and the money spent on the lamp then comes back to Somerset.

Money spent at local Goodwill stores goes toward helping people like Jessica Shaffer, who has been a part-time employee at the Goodwill in Somerset for seven years.

She used the work training program to become more self-sufficient after she graduated form high school.

“I wanted a job because I like the paychecks,” the 27-year-old said. “It helped me be more independent.”

The Jennerstown resident is responsible for sorting through items dropped off. She hangs clothes and tags items like video tapes and books. Goodwill was her first job.

“The program helps individuals who never worked or who have had sporadic work,” Burkey said. “They can understand what it’s like to work, be a supervisor, handle a paycheck and handle other responsibilities.”

Those utilizing the work program are often referred to Goodwill by other agencies, such as vocational facilities or Mental Health and Mental Retardation (MHMR) program.

“We work with entities in our communities to try to find funding for people using the programs,” Bandstra said. “We’re all about work and putting people to work.”

Retail stores account for 60 percent of the nonprofit’s revenue, Bandstra said. Now more than ever items are flooding shelves and clothing racks.

“We have more out on our shelves than we ever have,” she said. “Every 15 minutes stuff is going out in the store and rotating on racks.”

And the retail stores operate on a single price point system, which means similar clothing is priced the same — whether they are designer jeans from the mall or less known brands from small department stores.

Bandstra said that even a donated item that can not be re-sold can still be recycled.

“Anything and everything can be recycled, even if it’s not placed in the store to be sold,” she said.

Clothing items that are too worn can be bought by rag dealers, toys can be sent to other countries and books can be recycled. It is called a secondary market, and employees in that market will pay Goodwill for the items.

“Just about nothing goes in the trash anymore,” Bandstra said. “It’s all re-used in some way. It’s almost like we were one of the first recyclers.”

Bandstra said she hopes that people who donate to Goodwill realize that their items have more of a purpose than being resold — that they are helping their fellow community members find work.

Goodwill of the Southern Alleghenies started in 1962 and has 10 retail stores within the counties it serves. The organization also operates 18 custodial contracts in the territory. In Somerset, the Pennsylvania Department of Transportation, Pennsylvania State Police and the state Fish and Boat Commission utilizes those services.

25,538 people were served across the six and a half counties last year

4,927 people have been served in Somerset County so far this year